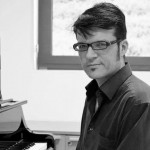 Andrés VALERO-CASTELLS was born in Silla (Valencia) in 1973. He studied at the Superior Conservatories of Valencia and Murcia, gaining diplomas in 8 specialties with 4 Honorable Mentions and the End of Degree Prize for Composition. His teachers included R. Ramos, L. Balada, E. García Asensio, E. Cifre, M. Galduf, J. Vives and V. Campos. He has attended master classes with B. Ferneyhough, J. Rueda, J.M. López, C. Halffter, T. Marco, L. de Pablo, M. Hernández Silva and P. Sánchez Torrella, among others. He obtained an Advanced Studies Diploma from the Universidad Católica de Valencia. Since 2004 he has taught composition at the “Joaquín Rodrigo” Superior Conservatory in Valencia.

He has received prizes and honors in France, Italy, the USA and Spain. His works have been performed throughout Europe and the USA, in Argentina, Puerto Rico, Panama, Japan, South Korea and Hong Kong, among others. His scores have been published in Spain, France, Switzerland and the USA. His works have been premiered by the symphony orchestras of Valencia, Galicia, Cordoba, Murcia, the RTVE Orchestra, the Spanish National Orchestra, The World Orchestra, Covent Garden soloists and the Medillin Philharmonic. His works for band have been performed by both the best Spanish ensembles and prestigious foreign bands. He has been a manager of the Association of Valencia Symphonic Composers, resident composer of the International Spanish Brass Festival and of the Youth Orchestra of the Valencia Region.

He has been Principal Guest Conductor of the Llíria Banda Primitiva, and is the founder of the Estudi Obert ensemble. He was the conductor of the bands of the Mislata CIM and the Picassent SAM. He currently conducts his band, La Lírica de Silla. As a guest conductor he has led the Valencia Orchestra, the Municipal Bands of Valencia, Madrid, Barcelona, Alicante, A Coruña, Santiago de Compostela, Musikene and the Artística de Buñol, among others, as well as the band of the FSMCV, and Valencian Music Day.

This work was commissed by the Alzira SM and A. Crespo, who performed it at the CIBM in 2002. Since then it has been performed and recorded in numerous countries such as Switzerland, Norway, Holland, Germany and Singapore.

It is a remarkable descriptive piece, the product of a visit to the valley by the author.

The first movement is divided into 2 sections: Les Serres and L’Incendi. The mountains reflected are the Cavall Bernat and Les Agulles. The first, with its noble, tranquil, grandiose and solemn appearance, will be one of the most important elements as its theme will reappear cyclically in the evolution of the work. The second is a significant contrast because its appearance (rough, pointed, sharp, multiform) is radically different. Finally we have a recreation of the the worst fire to occur in this unique landscape, that of 1983.

The second movement is inspired by the archeological jewel of the valley: the Monestir. The initial atmosphere of religious reflection gives way to the progressive edification of this modest, but no less valuable for it, historical treasure. In some way this landscape evokes the progression from the first hermitages to the establishment of the Order of Saint Jerome in 1401. It concludes with the redevelopment of the audible image of the monks praying peacefully in the cloisters.

The final movement also has two parts. First, to the rhythm of djembes, the feared Moorish Pirates appear, who used to frequent the coast during the years of Muslim rule; with their departure the monastic retreat sounds once again. The second part opens with a brilliant fanfare which indicates the arrival of the most illustrious personage to visit the place, King Felipe II. It is the year 1586, one of the moments of greatest splendour, and such is the pomp of the event that a new bridge, the Pont de Pedra, was built to allow the royal carraiges to access the monastery.