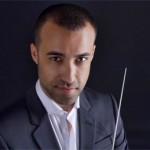 He has conducted various ensembles both in Spain and various European countries. He is currently the conductor of the Oliva “Asociación Artístico Musical” and the “Orquesta Sinfónica Atrivm”. As part of this work he has had the opportunity to direct prestigious soloists such as: Vasko Vasilev, Pacho Flores, José Franch, Francesca Calero, Luís González, Roberto Turlo, Juan Lago and Pablo Zinger.

He also teaches Orchestra as a member of the Valencia Regional Government teaching corps for music and the scenic arts. His compositions have been published by Omensbands, Cap Music, Tot per l’aire and Piles. He has been a jury member in numerous composition and performance contests and his music has been recorded to CD by various ensembles.

He is a member of the Valencia Academy of Music and the association of composers, COSICOVA. In 2014 he received two nominations for the Hollywood Music in Media Awards.

OBLIGATED PIECE FOR THE SECOND SECTION FOR CIBM 2015

I have always been interested in astronomy, both the study of constellations and the origin of their names. While searching for these origins I was captivated by the myth of Andromeda and Perseus, a myth which contains a love story and which explains the location of the Andromeda constellation in the sky.

The piece does not seek to musicalize the tale but rather takes it as a point of departure for the construction of the musical discourse.

Our mythological character’s parents offer her as a sacrifice to the gods to appease them after they had offended Poseidon who punished them by sending a flood and the sea monster Cetus to ravage their kingdom, Aethiopia.

Perseus was returning from having decapitated the Gorgon Medusa, flying on the back of Pegasus. Seeing the beautiful Andromeda chained to some rocks with the terrible monster getting ever closer to her, Perseus dived towards her and, closing his eyes, he showed the head of Medusa to the monster. Cetus immediately turned to stone and sank under the clear waters of the Mediterranean forever.

When Perseus freed Andromeda from her chains she fell into his arms and when they looked into each other’s eyes they fell in love immediately.

The Queen Cassiopeia had promised that whoever saved her daughter could marry her, but she went back on her word and tried to kill Perseus. He managed to defeat her and returned to Greece, taking Andromeda with him so he could marry her.

The god Zeus placed Cassiopeia in the sky, sitting in her throne in such a way that during some seasons she would be upside down as a punishment.

Athena, moved by the beautiful love story of Perseus and Andromeda, placed their constellations next to each other in the heavens.