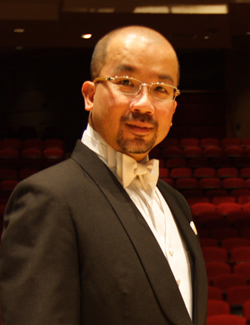 As a music education enthusiast, Choi is actively involved in conducting master classes and workshops, and is frequently invited to act as an adjudicator in various music competitions and a guest conductor for various projects from recordings to overseas tours. He is also a keen composer and orchestral arranger; he has published over a hundred pieces for soloists, ensembles and orchestras. He has successfully worked with both Western and Chinese instrumental music with the Hong Kong Children’s Choir, and has performed in Scotland, Germany and Hungary to great acclaim. He was awarded the “Best Music Arrangement Award” by the Hong Kong Education Authority for his contribution to arranging music for local schools. He has also providing technical and managerial support to orchestras, bands and ensembles at numerous local schools, such as Good Hope School, Diocesan Preparatory School, Queen’s College, Maryknoll Convent School, Ying Wah Girls’ School, St. Mary’s Canossian College and St. Paul’s School. He has given numerous performances with groups all over the world including in France, Australia, Japan, Korea, Singapore, Taiwan and Macao. 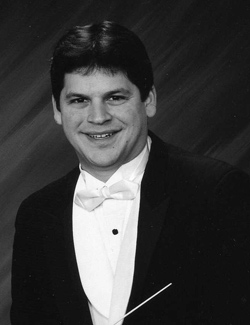 John Ginocchio is an Associate Professor of Music and Director of Bands at Southwest Minnesota State University where he conducts the Symphonic Chamber Winds, the Concert Band, and the Jazz Ensemble. He teaches conducting, popular music, and instrumental music education courses. He also serves as the Chair of the Department of Fine Arts and Communication.

Dr. Ginocchio holds Doctor of Arts and Master of Music degrees from Ball State University in Muncie, Indiana and a Bachelor of Music Education degree from Indiana University. He previously served as a doctoral assistant director in the band department at Ball State University working with the Concert Band, Pep Band, Pride of Mid-America Marching Band, and the Jazz Ensemble. He was also a conductor for the East Central Indiana Youth Symphony Orchestra. Dr. Ginocchio began his career as the Director of Instrumental Music for the Adams Central Community Schools in Monroe, Indiana; a position that he held for ten years.

Dr. Ginocchio is an active guest conductor, clinician, and adjudicator and has worked with bands throughout the United States and in Spain. He is the co-founder and a clinician for the Minnesota Area Conducting Workshop. He is an active speaker and author on topics in music education including conducting, ensemble seating, composition in the classroom, and popular music classes. He has presented sessions at the Midwest Clinic, the Biennial World Conference of ISME, and at numerous state and regional conferences and workshops. His articles have been published in The Instrumentalist, The Bulletin of the Council for Research in Music Education, Contributions to Music Education, The Music Educators Journal, and Teaching Music. Dr. Ginocchio is a member of the National Association for Music Education, the College Band Directors National Association, and the World Association of Symphonic Bands and Ensembles. 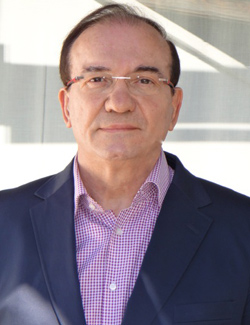 Josep Roda Batlle was born in Sant Mateu (Castellón). He studied at the Barcelona Municipal Conservatory of Music where he obtained the highest marks in the following diplomas: piano teaching, composition and instrumentation, and orchestra conducting teaching. His teachers were Joan Pich Santasusana, Manuel Oltra, Xavier Montsalvatge and Antoni Ros Marbà. While he was studying music he also attended the Central University of Barcelona where he received his undergraduate degree in philosophy. He also studied for his doctorate in art history at the same university. As an orchestra director he won the National Vocation Prize. He furthered his studies in orchestra direction at the Salzburg Mozarteum.

He has conducted the orchestra of the Gran Teatro del Liceo, the Orchestra of the Barcelona Municipal Conservatory of Music, ‘Camareta Instrumental de Barcelona’, the Catalonia National Youth Orchestra and the ‘Ferrán Rigual’ Operetta Company, as well as the Municipal Bands of Barcelona, Castellón and Seville. He was an expert music consultant for the wind band contests organized for the TVE programs ‘Gente Joven’ and ‘Nueva Gente’. He has been an adjudicator for composition and performance competitions and at numerous wind band contests.

As a composer he has won national awards and has premiered his works, including many compositions for wind band, at the Valencia Palau de la Música and the Barcelona Auditori, as well as on TVE and TV3.

He has numerous publications on teaching and learning music to his name. He has taught music in high schools, in addition to teaching harmony, counterpoint and accompaniment at the Barcelona Superior Conservatory of Music.

He has held the following posts: Deputy Director for Music Education in the Department of Education of the Catalonia Regional Government, Director General of ESMUC, and Coordinator of the Catalonia National Youth Orchestra. Today he continues to work as an active conductor and composer. 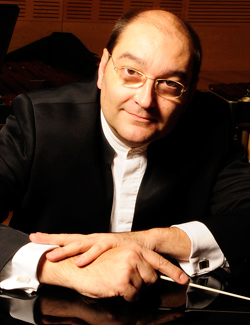 He has won prizes in various international orchestra and band conducting contests including the “Gold Baton” at the WMC in Kerkrade, the “Gregorz Fitelberg” competition in Poland, and that of Radio Television Hungary in Budapest. In 1997 he was nominated for the Limburg University “Henriette Hustinx” Fine Arts Prize.

He began his career as an assistant conductor to the WDR Radio Symphony Orchestra in Cologne. He soon received high praise for his debut performances leading the Limburg Symphony and the Frankfurt German Chamber Orchestra. In 1998 he became resident conductor of the Haarlem North-Holland Philharmonic Orchestra which is associated with the Dutch Royal National Ballet.

As a multifaceted conductor, he has led some of the most prominent ensembles in countries such as Germany, Italy, Holland, Poland, Hungary, Romania, the Czech Republic and Mexico. In Spain he has conducted the symphonic orchestras of Valencia, Córdoba, Murcia and Castilla-León. The 28th edition of the “Mostra de Valencia” film festival gave him and the American director Spike Lee its gold award, an honor shared by directors and composers such as Maurice Jarre, Bill Conti, Francis Lai and Michael Nyman.

He was staff conductor of the Band of the Royal Dutch Air Force from 1995 to 2010. He has collaborated with the Basque Country “Musikene” Superior Music Centre on orchestral projects. Since 2004 he has taught chamber music and instrumental direction at the Aragon Superior Conservatory of Music (CSMA) where he is also the principal conductor of the Symphonic Band and “Sinfonietta” Wind Orchestra. 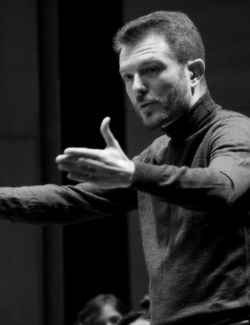 Òscar studied conducting and composition at the Guildhall School of Music and Drama and the Royal Academy of Music in London. He was awarded a PhD by the latter institution in 2010.

He teaches at the Royal Academy of Music and the Yehudi Menuhin School, and he has been a guest lecturer at the Royal Conservatoire of The Hague School for Young Talent.

As a composer he won the competition to celebrate the 50th anniversary of the Royal Festival Hall’s organ, the Musicians’ Company Memorial Prize, the Guildhall School/Orchestra of the Swan Composition Prize, the “Best Soundtrack” prize at the Tenerife Short Film Festival, and Valencia’s “2008 Music of Today” award.

He has been commissioned by the Aldeburgh Festival, the London Philharmonic Orchestra, the Schubert Ensemble, the Valencian Music Institute, the Kontakte percussion group, and the “Estío Burgalés” summer festival. His compositions has been premiered at Wigmore Hall, the Royal Festival Hall, Yale University, the Valencia Palau de la Música, and the Auditorio de Galicia with the Galicia Royal Philharmonic Orchestra; they has been broadcast via radio in Spain, Mexico, Denmark and the USA; and have featured in the City of London Festival, ENSEMS-València, Composers Now (New York), Música en Compostela, the European Conservatory Conference, and the International Composers Summit in Mallorca.

He has written orchestral arrangements for Heinrich Schiff and the Kremerata Baltica (Gewanghaus, Leipzig 2009), the Yehudi Menuhin International Competition (Beijing, 2012) and was a resident composer at the Barbican Pit Theatre (London).

He is currently Artistic Director of the City of Salamanca Youth Orchestra (2011-2014). He regularly conducts concerts with ensembles from the Yehudi Menuhin School and the Royal Academy. He has been a guest conductor for projects involving dance and audiovisuals at the London Contemporary Dance School, the Segovia Festival, and the Madrid Fine Arts Circle. His future engagements include concerts with Camerata XXI and the Contemporary Ensemble of the University of Jaén.