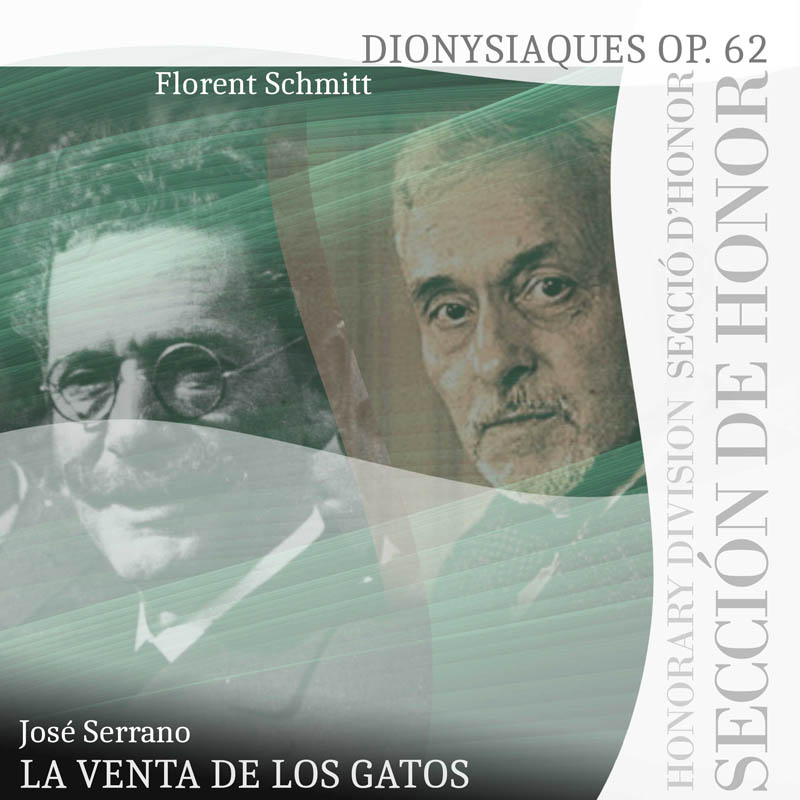 The bands participating in the Honorary Division of the “Ciudad de Valencia” 2022 International Music Band Contest will have to perform the scores “La Venta de los Gatos” by composer José Serrano and “Dionysiaques Op. 62” by Florent Schmitt as mandatory pieces.

He was born in the town of Sueca in Valencia in 1873. As with many other composers of the Spanish lyrical-drama genre known as Zarzuela, it was his father, the conductor of a musical band, who showed him his first steps in this field. At the age of 16, he moved to Valencia to continue with his studies, relocating later to Madrid with the intention of obtaining a grant to finance his studies, though there he stumbles upon a vastly different world to the one he had left behind in Valencia, and where his chances of success were scant.

The progressive blindness of the teacher Fernández Caballero forced him to request Serrano’s aid for the score to Processional Giants (Gigantes y Cabezudos), a work which was praised in El Saloncillo, a magazine in which Serrano began to write for some months earlier.

Serrano’s debut composition enjoyed a successful premiere, ‘El Motete’, dates back to 1900 and it was the Álvarez Quintero brothers who offered him the libretto. José Serrano did not squander this chance to place himself amongst the leading composers. His standing was enhanced by the works undertaken in the first third of the 20th century, making a name for himself in what was known as the ‘little genre’ which, although this would lose ground in favour of classical zarzuela, would be much loved for many years by theatregoers. Amongst his more than 50 theatrical works, worthy of special mention are: the ‘Moorish Queen‘ (La Reina Mora) with text by the Álvarez Quintero brothers, ‘Moors and Christians‘ (Moros y Cristianos), ‘The Soul of God‘ (Alma de Dios), ‘The Song of the Forgotten‘ (La Canción del Olvido), ‘The Carnations‘ (Los Claveles), ‘The Sorrowful‘ (La Dolorosa) and ‘Los Gatos’ Lodge‘ (La Venta de los Gatos).

Serrano is also held in great renown by all natives of Valencia as the composer of the anthem for the Regional Exhibition of Valencia in 1925, or the well-known pasodoble entitled «El Fallero». Serrano died in Madrid on the 8th of March 1941 before he could see the premiere of los Gatos’ Lodge, based on a narration by the poet Becquer.

This piece was written as an attempt to establish Spanish operatic tradition. In 1900, José Serrano had just enjoyed his first success thanks to the snippet «El Motete«. Encouraged by the success of the work, the Álvarez Quintero brothers propose the maestro Serrano, who devised the score of the opera entitled «The Sale of the Cats«, on a libretto by Álvarez Quintero himself inspired by a narration by Gustavo Adolfo Bécquer. The following year the play had been completed, though it was not released until 1943, at the Teatro Principal in Valencia, two years after the death of the musician, attributing to the lack of instrumentation as the grounds for its non-release, him becoming a figure of mockery and, fostering his fame as a «loafer» that would persecute him throughout his life. According to all the press of the forties, this orchestration was completed by Enrique Estela, who was entrusted with conducting the premiere.

The plot of the work faithfully follows Bécquer’s homonymous narrative, The first part is brimming over with joy, celebration and shared love: Lorenzo loves Amparo, a young man who since childhood has lived in the aera in Seville called «Venta de los Gatos«, rescued from the one included by Lorenzo’s father. The second is dark, sinister, pierced by pain and death: Amparo has been recovered by his father, a nobleman who was forced to leave Spain for political reasons; the girl longs for her previous life and as she cannot return to it, she dies; when the corpse is taken to the cemetery that has been raised near the Venta, a type of roadside tavern, Lorenzo discovers it and descends into madness.

The narrative is not based on a true story, although it does tackle historical elements since La Venta de los Gatos and the San Fernando cemetery actually existed.

Impressionist French composer who took his first lessons in composition under the tutelage of the local composter Gustave Sandre, prior to enrolling in the Conservatory of Paris at the age of 19, studying under the composers of the stature of Jules Massenet, Gabriel Faure and Theodore Dubois. In the year 1900, he was awarded the Prix de Rome.

Before 1920, it was considered that Schmitt was at the cutting edge of «advanced» and non-conformist musical composers, forming part of a group knowns as the Apaches and being one of most performed French composers in the interwar period, only later to be swept aside, although he continued to compose up to his final days. He held the post of Director of the Conservatory of Lyon from 1921 to 1924, and from 1929 to 1939 he worked as a hard-hitting critic for the magazine named «Le Temps».

Florent Schmitt was a sophisticated composer, capable of «skipping tracks» stylistically and creating convincing objet d’art in diverse styles. He refused to reject his curious musical personalities and was the victim of fierce attacks from those who felt at the time that not joining forces with the current vanguard gave grounds for disdain. Although he was a traditionalist in many aspects, his music often entailed surprisingly modern and rhythmic aspects. He wrote close to 138 pieces throughout his life, compositing for most of the main musical formations, with the sole exception of opera. His style was mainly impressionist, reminiscent of Debussy, though also with a nod to Wagner and Richard Strauss. His quintet for piano G minor, composed in 1908, helped to establish his reputation, although nowadays his most famous compositions are ‘La tragédie de Salomé’ and ‘Psaume’ XLVII (Salmo 47) and his work for the Concert Band ‘Dionysiaques Op. 62’, written between 1913 and 1914.

Furthermore, the score has an intriguing orchestration, which requires several unusual instruments for the epoch, such as the sarrusophone, the bass saxophone, the double bass clarinets and even the string double basses.

Like many of Schmitt’s compositions, the music is a hurdle for its performers, which may partly explain why «Dionysiaques» took many decades to become a staple of the concert band’s repertoire.

The first two recordings of Dionysiaques were made by the same Band of the Garde républicaine de Paris, three months apart! The first was recorded in November 1927 with composer-director Guillaume Balay conducting, while the second recording was made in February 1928 under the guidance of Pierre Dupont.

These early Dionysiaques recordings are of particular historical interest since they used Schmitt’s original orchestration, including a series of instruments that are no longer part of the typical list of wind ensembles (petit bugles, saxhorns, sarrusophones and the like).

Yet something interesting occurred, starting in another corner of the world. In Japan, a country with a marked tradition of woodwind schools, Dionysiaques began to appear as a work of competing bands. Over the past 30 years, there have been countless performances of Schmitt’s score with wind ensembles at the middle, secondary and university levels.

Most recently, in 1992, Dionysiaques was named one of the best compositions for the «Top 10» concert band performances as part of an overall assessment of «serious artistic merit» wind scores by a panel of 20 judges including such great specialists as Eugene Corporon of the Cincinnati Conservatory and Donald Hunsberger of the Eastman School of Music, with the legendary Frederick Fennell as project advisor.

What gives Dionysiaques its staying power as a concert piece? It is highly ingenious … always fresh and interesting … and in the end, genuinely thrilling. One rarely hears a piece of music that transports the listener through so many moods and contrasts in a dozen minutes.

In short, Dionysiaques has existed for a century, yet it never ages.