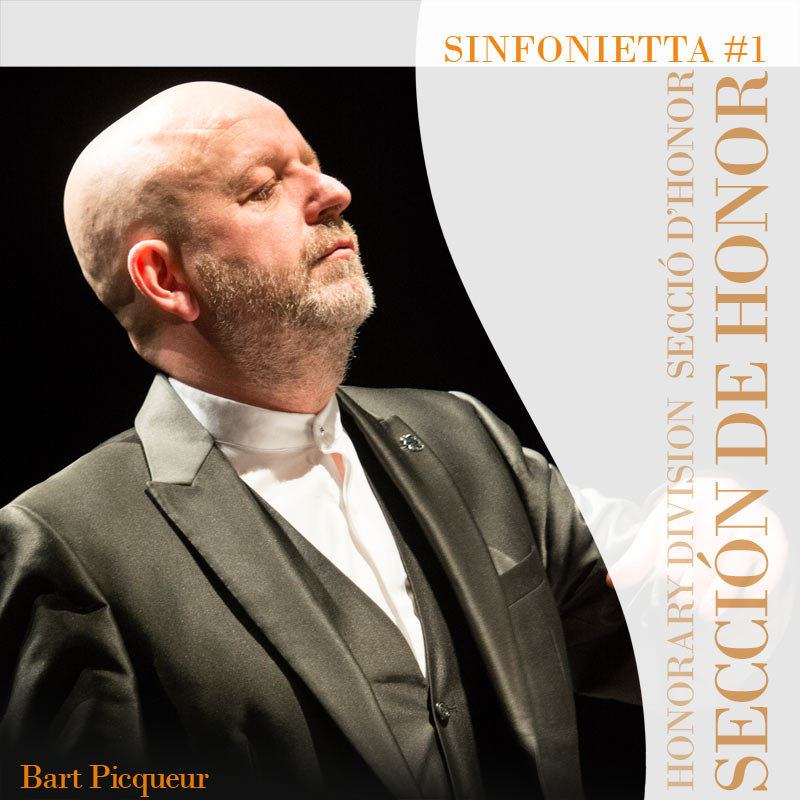 The groups participating in the Honorary Division of the International Music Band Contest «Ciudad de Valencia» 2018 will have to perform the score «Sinfonietta #1» by composer Bart Picqueur as a compulsory work. The work will premiere worldwide in this event.

The composer and conductor, Bart Picqueur, completed his professional training at the Royal Conservatory of Ghent where he received his Master’s in wind band conducting, theory, clarinet and music teaching. His teachers included Dirk Brossé, Freddy Arteel, Fabrice Bollon and Francois Glorieux. He also studied conducting with Hardy Mertens at the Fontys Conservatory in Tilburg (Netherlands).

His compositions have been recorded by well-known wind bands such as the Royal Symphonic Band of the Belgian Guides, Osaka Municipal Band, Rundfunk Blasorchester Leipzig, and the Royal Military Band of the Netherlands.

His works have been compulsory pieces in various international contests: ‘Insomnia’ at the 2017 European Brass Band Championships, ‘Mutations’ at the European Wind Band Championships 2018, and now ‘Sinfonietta #1’ at the Valencia CIBM 2018.

In parallel to his work as a composer and conductor, he trains young musicians in his conducting classes in Ghent and Ostend. He is regularly invited to teach master classes in various European countries.

As its name suggests, Sinfonietta no. 1 is a small symphony. It is an abbreviated version of the composer’s own first symphony, commissioned by the KRKA Wind Band from Slovenia. The composer has maintained the original four-movement structure, but the material has been reduced to a strict minimum and the music continues without pausing between the parts. However, the result is not a connection of fragments from the original symphony, but rather a new composition which is well-balanced in form and development.

Although the music is not programmatic, the four movements have evocative subtitles. All of them represent general attributes such as craftsmanship, love, humor and unity, all of which are necessary to build a great band. This four-time structure is a reference to the classic symphony. Consequently the first movement has a highly formal construction (sonata form); the second has a lyrical theme; the third, «Humor», is clearly related to the ‘scherzo’; and the work finishes with a grandiose finale featuring an organ chorale.