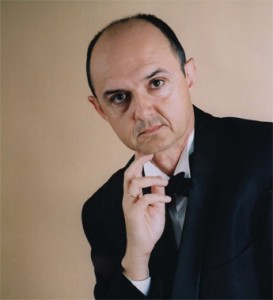 Juan Bautista Meseguer Llopis was born in Alberic (Valencia), where he began studying music with the local music association. He went on to the Valencia Superior Conservatory of Music, where he finalized his studies in Harmony with José María Cervera Lloret, before receiving his degree in Saxophone in Madrid under the tutelage of Maestro Pedro Iturralde.

He studied Composition in the Madrid Superior Conservatory of Music with Antón García Abril, Román Alís and José López Calvo, and Orchestra Direction with Enrique García Asensio and Manuel Galduf. He has completed various courses and seminars on composition and analysis of twentieth-century music with composers such as Carmelo Bernaola and Carles Guinovart, and studied soundtrack composition with Alfons Conde and singing with Emili Gispert.

In 1980 he was appointed to the post of Music Officer in the Army Music Corps, as he was ranked no. 1 in his specialty.
In 1993 he passed public examinations to conduct the higher ranks of the Army Music Corps, directing the Music Division of the Tenerife Military Government, the Music Division of the Barcelona Military Government, and the Symphonic Band of the Tarragona Music Association. Since October 2010 he has been Principle Conductor of the Music Division at the High Readiness Forces (Land) Headquarters in Valencia.
He has written more than 140 compositions for band, orchestra and chamber groups.

He is a member of SGAE, COSICOVA and an Academic at the Academy of Valencian Music. He has been awarded the Cross, Commander, and Commander with Star decorations of the Royal and Military Order of San Hermenegildo. He also has two military merit honors with White Decoration, the Merit Cross of the Civil Guard, the “Distinguished Service Diploma” from Tarragona Town Hall, a collaboration diploma from AEFE (Agrupación Española de Fomento Europeo), the Gold Insignia of Alberic and the Silver Insignia of the Symphonic Band of the Tarragona Music Association. He has released music with labels such as: Rivera Música, Boileau Editoral, Musicvall, and Edicions Musicals CB.

Composed in 2004, this is a dynamic work with great rhythmic and tonal strength. The harmonic language ranges from tonal to modal creating some colourful harmonic sections.

This work was first structured in three movements: Gallop, Sentimental Waltz and Burlesque, but because the Palfir 2004 March (March for an inauguration) was composed the same year for the opening of the new acoustics at the Palau Firal in Tarragona, the composer included it as an introduction to the aforementioned work.

It is worth noting the emotiveness of the main theme of the Waltz, taken from the march “Our Lady of the Rosary” that the composer dedicated to his mother in 1999, and that listeners can here appreciate transformed into waltz tempo.