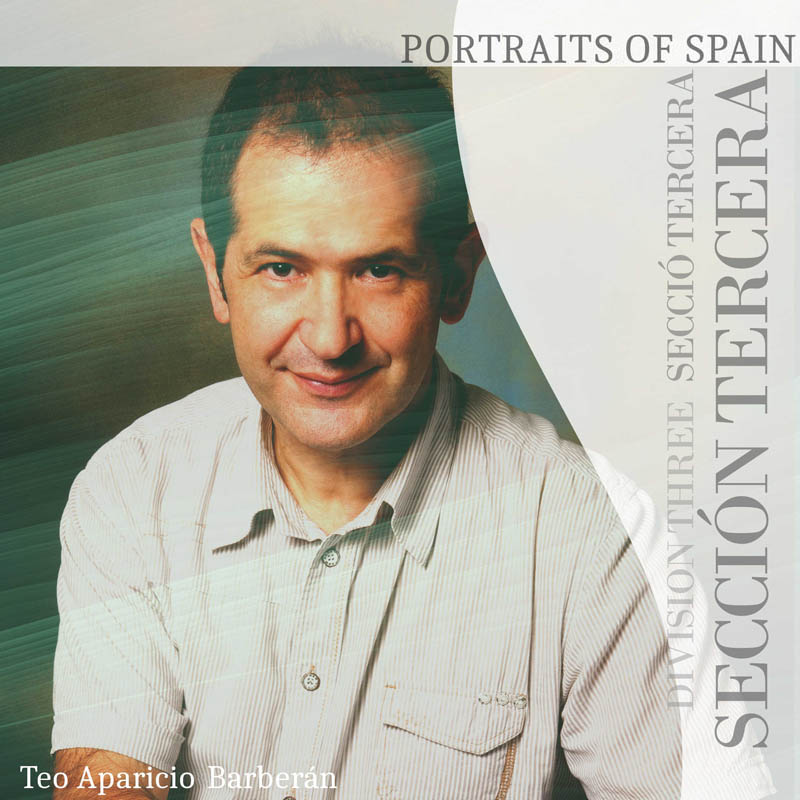 The bands participating in the Section Three of the International Contest of Music Bands «Ciudad de Valencia» 2022 will have to interpret as a compulsory work the fantasy for band «Portraits Of Spain / Portraits of Spain» by the Enguera’s composer Teo Aparicio Barberán.

He was born in Enguera in the year 1967. He studied saxophone under M. Vidal, F. Moral, G. Castellano, Antonio Daniel and J.M. Londeix amongst others. He has also studied double bass, piano, harmonies, counterpoints and fugue, composition and conducting of orchestras, receiving two honorific mentions upon completion of his studies. The composer Luis Blanes has been the person who has exerted the most influence over his musical career. He holds a DOCTORATE in music awarded by the faculty of humanities of the University Cardenal Herrera CEU.

He is the composer of more than 100 pieces for different musical groups. His works have been performed in Austria, Germany, France, Switzerland, Portugal, Colombia, Belgium, Japan, Holland and the United States, etc. His music has been included in numerous national and international contests. Renowned soloists such as Armin Rosin, Raul Junquera, Vicent López, Manuel Miján and Ana María Ribeiro have premiered his music. His pieces are showcased on more than 15 CDs released by the labels Ed.Piles, Albadoc, Tot per l´aire, the Belgian music publisher Beriato and the American Hal Leonard. He is a member of both COSICOVA and WASBE. He was awarded a EUTERPE for the best symphonic musical creation in 2012.

He has worked as teacher of conducting and composition in different universities and schools in Costa Rica, Colombia, Portugal, Belgium and Spain. He presently combines teaching with composition.

This is a minor fantasy work that contains part of the musical roots inherent to this country. The work can be divided structurally into four sections that appear uninterruptedly, aiming to create different ambiences of Spanish folklore. We can hear the typical movement known as «seguidillas» with its syllable counted lines, starting the piece with a fiercely contagious rhythm. This is followed by an «Andalusian romance», in a more restful section featuring an exotic melody. This romance contains an A-B-A’ structure, with the B section contrasting (Allegro energico) and A’ a repeat of the first part featuring a codetta that transitions into the posterior fandango.

The «fandango», undoubtedly, is one of the most characteristic airs / tempos found in Spanish music. Written in 3/8 time using an «Allegretto Scherzando» as a metronomic indication, it includes, it goes without saying, the colourful nature of one of our standout instruments, namely the castanets. To conclude, the «copla» vocal section from the Mediterranean region cannot be overlooked. After a series of striking chords from the brass section that remind us of bugle calls, comes the tabal percussion section. The trumpet is given the role of unveiling the piece that will appear «in crescendo» through different instrumentations before reaching the climax. Finally, there is a return to the ‘seguidillas’ tempo and a brief final coda. This piece is wholly constructed within the tonal language adapted to the wind instruments and using the Phrygia scale as the main generating element among other highly traditional harmonic backdrops from Spanish folklore.

This work by Teo Aparicio is one of the pieces from the Spanish repertoire for bands most frequently performed worldwide. It was premiered and recorded for the Rundfunk Blasorchester in Leipzig in 2004. In 2010, it was included in the disc «Portraits of Spain» (Best Selections for Concert Bands) issued by the prestigious music publisher Beriato (currently Hal Leonard).