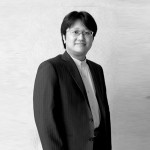 Satoshi YAGISAWA was born in 1975 and graduated from the Department of Composition at Musashino Academia Musicae. After also completing his master’s degree there, he continued his research studies for two further years.

His works for wind orchestra are popular in Japan and many other countries and were introduced in Teaching Music Through Performance in Band published by GIA Publications in the U.S.A., published by De Haske Publications (Hal Leonard MGB) in Holland, selected as a compulsory piece for the University of North Texas Conductors’ Collegium, and performed at the 12th World Association for Symphonic Bands and Ensembles (WASBE) in Singapore and the Midwest Clinic 2008, 2011 and 2013 in Chicago. In Japan he composed music for National Arbor Day, the National Sports Festival, the Japan Inter High School Athletic Meet, and some schools. He was appointed Ceremonial Music Director for the National Sports Festival 2010 in Chiba. He is active in a wide variety of areas including adjudicating competitions, working as a guest conductor, teaching, lecturing, writing for music magazines, and advising a music publisher. He is one of the most energetic young composers in Japan today and received the 21th Japan Academic Society of Winds, Percussion and Brass Award (2011) and the Japanese Band Directors Association Shitaya Encouragement Award (2011). Currently he teaches wind, string, and percussion instruments at SHOBI Music College, Tokyo.

His major works include A Poem for Wind Orchestra – Hymn to the Infinite Sky; Machu Picchu: City in the Sky – The mystery of the hidden Sun Temple; Perseus – A Hero’s Quest in the Heavens; and Let’s Have Hope for a Tomorrow (a symbolic song for the reconstruction after the Great East Japan Earthquake).

Blue Outer Space – Droplet Of Life was written by Satoshi Yagisawa in 2007 as a commissioned work for the Horikoshi High School Symphonic Band.

The piece is made up of five movements with the following themes: “The Beginning of the Universe”, “Collision of Asteroids”, “The Creation of the Earth”, “Planet of Water: the Earth”, and “Gratitude for all forms of life”.

The music is written in choral style, fully expressing the preciousness of life and gratitude to the Earth. For this reason, Blue Outer Space – Droplet Of Life can be viewed as representative of Mr. Yagisawa’s wider body of work.

He says that he hopes the music will give audiences the opportunity to reflect on the importance of the Earth and life.

The work was published by Wind Art Publishing of Japan in 2008.