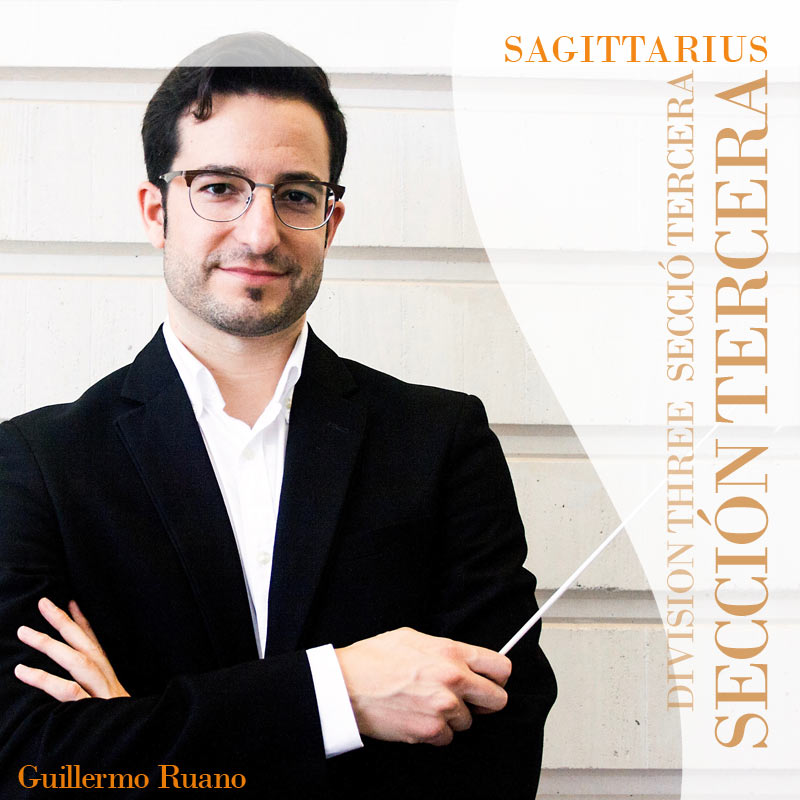 The groups participating in the section three of the International Music Band Contest «Ciudad de Valencia» 2018 will have to interpret as a mandatory work the score «Sagittarius» by the composer Guillermo Ruano.

Guillermo Ruano is a young composer from Almansa, Albacete. At 7 years old, he began his musical studies at Almansa Professional Music Conservatory. There he studied piano and percussion, obtaining the Professional Piano Title. He also achieved the Music Superior Title within in Composition at the Murcia High Music Conservatory. He does conducting courses with José Rafael Pascual Vilaplana and he got the Master of Music in Scoring for Film, TV and Video Games at Berklee College of Music in Valencia.

He has composed more than 40 pieces of music for concert, media and theatre plays. He has been awarded in several national and international competitions. Ruano is a member of the SGAE (the Spanish Society of Authors and Publishers). His works have premiered and have been performed in auditoriums and places such as Air Studios in London, «Palau de la Música» of Valencia, «Palau de les Arts Reina Sofía» and «Auditorio de la Diputación» of Alicante, working with groups such as the «Sociedad Musical» of Alzira, «Sociedad Ateneo Musical» of Cullera, Municipal Symphonic Bands of Bilbao and Alicante, Budapest Art Orchestra, Clarinet Quartet Vert, musicians of London Symphony Orchestra or the Kammerensemble Classic der Deutschen Oper Berlin.

This work is inspired by the King of the Centaurs. The music has a heroic character with an A-B-A form. The main theme continuously develops throughout the piece giving rise to new melodies and harmonies. The marching rhythm simulates the trot of the centaur. All of this contrasts with calm and melodious moments which immerse the audience in a fantasy world.