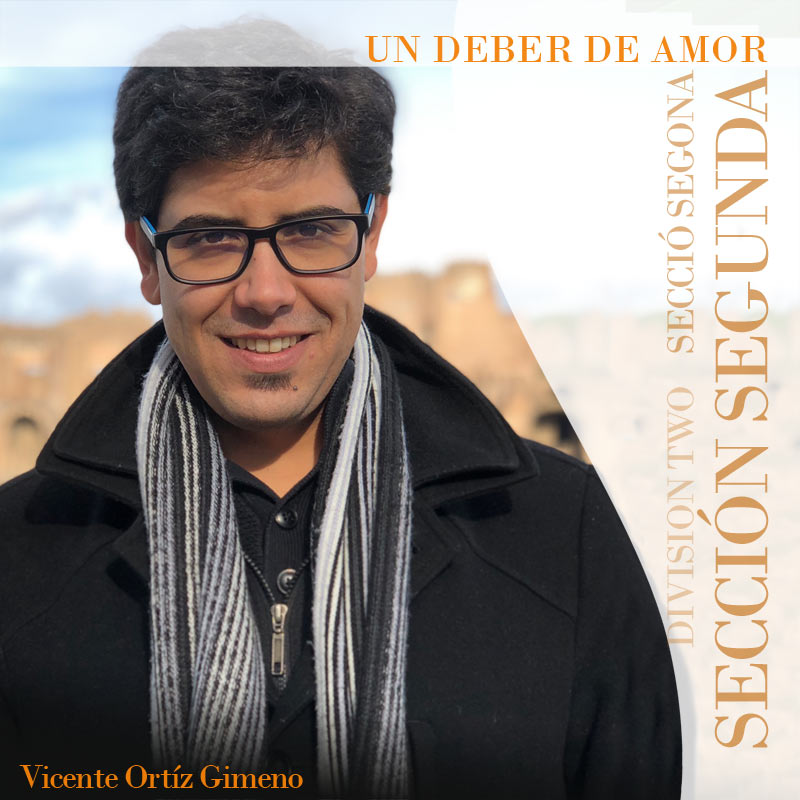 The groups participating in the second section of the International Music Band Contest «Ciudad de Valencia» 2018 will have to interpret the score «Un Deber de Amor» by the composer Vicente Ortíz Gimeno as a mandatory piece.

Among his more than 40 credits on cinema and TV projects, particularly worthy of note are his compositions from the Telecinco mini-series «Lo que escondían sus ojos» and the action comedy «Cuerpo de élite». He has worked as a composer on the films «Tadeo Jones 2», «Un gallo con muchos huevos», «Pequeños Héroes», «The Rezort» and biopics about John F. Kennedy and Walt Disney, among others. He has worked as an orchestrator on the TVE series «Isabel» and various films, including «Tadeo Jones 2», «Misconduct», «Hunter’s Prayer», «Pancho, el perro millonario», «La vida inesperada» and «Teresa». He has been a member of teams formed of composers such as William Ross, Federico Jusid, Lucio Godoy, Joel Goodman, Zacarías M. de la Riva, Andrea Morricone, Heitor Pereira and Hans Zimmer.

Vicente studied orchestra direction with Francisco Noya and George Monseur at Berklee College of Music in Boston (USA), attended classes at the University of California, Los Angeles (UCLA) with Travis Cross and Michael Haithcock and various courses with Enrique García Asensio and Bernardo Adam Ferrero. He was assistant conductor of the Berklee Symphony Orchestra and director of the Berklee Society of Composers Orchestra. He has directed concerts and recordings with the Hollywood Studio Orchestra, Berklee Symphony Orchestra and the Extremadura Orchestra in venues such as the Jordan Hall, Berklee Performance Center, Palau de la Música in Valencia and in recording studios such as The Bridge Studio and the Newman Scoring Stage at 20th Century Fox Studios in Los Angeles, and WGBH Studios in Boston. He has been a guest conductor for Los Angeles Symphonic Winds and in 2016 attended the Idyllwild Music Festival (California, USA) as a composer and guest conductor.

According to Neruda, «Remembering Miguel Hernández, who passed away in obscurity, and bringing his memory into the light, is Spain’s duty, a duty of love. «Un deber de amor» won the «Homage to Miguel Hernández» composition contest organized by the Castuera Town Hall (Badajoz) in July 2010 to celebrate the first centenary of Hernández’s birth. The piece, which is 15 minutes long, was premiered by the Castuera Municipal Wind Band under the direction of Marco A. González on 30 October 2010.

Although it is not a programmatic work, «Un deber de amor» is inspired by the poet and playwright from Orihuela and features three fundamental themes: war, love and life. The first section, with irregular rhythms, disparate beats, dissonances and fragmented melodies, alludes to Miguel Hernández’s participation in the Spanish Civil War and the problems he faced in developing his work as a writer. The second melodic and lively section, with lyrical melodies and choral passages, reflects the loves which influenced his personal life and also inspired him as a poet: the women to whom Miguel Hernández dedicated his works. The final section depicts the poet’s will to fight for his ideals despite the setbacks he suffered and all the obstacles he had to overcome in his short life. A musical motif used repeatedly throughout the work continues to transform with numerous variations and developments over a constant rhythmic movement until it reaches the final coda.